KBIA alum Rebecca Thiele and the "Wild West of Wind"

Rebecca Thiele is an energy and environment reporter for Indiana Public Broadcasting and a member of the class of 2011.

Thiele spoke with Adam Healy about her passion for climate coverage and audio storytelling.

Adam Healy:
What was it about the J school that influenced your, your move into public radio and covering the environment from that standpoint, rather than, you know, in a newspaper or on TV?

Rebecca Thiele:
Well, I also grew up listening to NPR and really liking the way that you could get transported into a story and just think about a story in a different way than just reading it.

So I think that it was just the perfect marriage of the two things that I already liked: that radio feel and the way that, you know, you can hear the sound of the interviewees and hear, you know, what's going on in the background, and that sound of, you know, whatever they're doing. And that married with my, you know, interest in the environment and energy issues.

Adam Healy:
What made you so passionate about climate change, and telling people about its effects?

Rebecca Thiele:
We keep saying, Oh, the weather is so weird today. You know, at some point, you have to sit back and say, these scientists are on to something. So I think that just like anybody else, I'm seeing the change too as a person.

Adam Healy:
Is there anything professionally, like a memory that stands out about a story that you just loved covering?

Rebecca Thiele:
I remember going out to this meeting about a wind farm. So at the time, there weren't a lot of—well, more than 10 years ago now. At the time there weren't a lot of wind farms in the Midwest, especially in Missouri. And there were all of these farmers who wanted the wind farm to come in, but they made them sign something like a nondisclosure agreement.

You know, that was suspicious.

And so I followed up with that. And, you know, then we found out that, you know, really at the time, it was kind of the wild west of wind.

Nobody was really talking about what kinds of rules should we have about wind farms? And how are these going to be built in a place like Missouri that doesn't really have a whole lot of wind? You know, it's not North Dakota.

So that was kind of, you know, I think about that story a lot, and how there were a lot of folks who didn't want me to do that story. 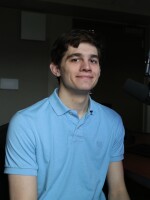