Clothing, household items, toys, games and decorations are some of the items that can be found at the new local thrift shop City Boutique. The store, run by the nonprofit organization City of Refuge, opened Monday and benefits refugees in Columbia.

Ruth Ann Striegel, a Columbia resident, stopped by and tried on a pink sweater on the opening day while browsing around the new store.

“It’s beautiful, it’s very nicely laid out,” she said while looking around the shop located at 10 N. Garth Ave.

The thrift shop is one of the efforts from the organization to fund its programs that help over 1,200 refugees each year in Columbia, said Dan Szy, the director of development for City of Refuge.

The organization connects refugees with services like education, housing, health insurance and employment as well as providing assistance overcoming language and cultural barriers.

“We are serving them to help them meet basic needs,” Szy said.

The City Boutique, adjunct to the new location of the City of Refuge, is a block away from the Daniel Boone Regional Library.

“I am at the library a lot so this will be convenient for dropping off donations and for shopping,” Striegel said. “I wish them a lot of luck and I’m glad that it’s here.”

The thrift shop has been busy since it opened at 9 a.m. Monday, Szy said. It was a great place for residents to gather and learn about the services offered by the organization while shopping, he said.

The thrift shop will be open every Monday through Friday from 9 a.m. to 4 p.m.

“We have made this into the best gift shop that one could imagine,” Szy said.

The City of Refuge began 12 years ago as a cleaning company with the primary goal to help refugees in Columbia find employment, Szy said.The initiative later transformed into a nonprofit to help the refugee community in different ways.

The shop is the most recent expansion of the organization, which moved to the building last month. Behind the new store one can find the City of Refuge offices, community center and study salons for English language learners, among other areas.

Szy said the organization aims to open a preschool next year in the same building to prepare kids ages 3 to 5 to go to school and work on their English language skills.

Next year's plans also include an upgrade to the thrift shop with an area to sell artisan pieces produced by refugee neighbors.

Szy said the initiative is another way to bring different cultures together and provide a space for people to engage with their refugee neighbors in Columbia.

“We are so thankful that Columbia is so supportive and welcoming of refugees,” he said."It's a cause that has mobilized so many of us to be engaged in the city and with neighbors that we wouldn't otherwise been."

CORRECTION: An earlier version of this story referred to the new thrift shop as "City of Boutique" instead of its actual name, "City Boutique." The name has been corrected and we apologize for the error. 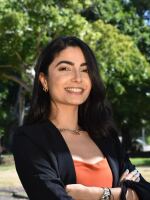