After Biden’s Win, Many St. Louisans Celebrate, Call For Healing And Urge Change&#13; &#13;

Many in the St. Louis region reacted with joy and relief Saturday when they learned that former Vice President Joe Biden has been elected president.

After the Associated Press determined that Biden was certain to claim the more than 270 electoral votes necessary to defeat President Donald Trump, St. Louisans were quick to herald the victory as a signal that a divided nation can begin to heal.

Dozens of people gathered in downtown St. Louis on Saturday afternoon for a rally and march from City Hall to the federal courthouse planned by Resist-STL. Some drivers stopped to see what was going on.

Lee Ruiz had been waiting four years for someone to defeat Trump.

“There’s been a lot of divisiveness, politically, racially, religiously,” said Ruiz, of St. Louis. “[We], need to unite and work together as a country. First step was getting the leader out of office that was in charge of all that. Then, within the community, on both sides, trying to find what unites us all, and not focus on fear.”

Many are happy that Biden’s running mate, U.S. Sen. Kamala Harris of California, will be the first woman, Black person and Indian American to serve as vice president.

“It’s just great that there’s a resolution, and we know who’s going to be in charge going forward,” said Adolphus Pruitt, president of the St. Louis NAACP. “I have no doubt that President Biden and Vice President Harris will do everything they need to do to not only bring the country together, but I think they’re going to tackle as quickly as possible those things that the nation needs to move forward.”

Topping the list, Pruitt said, would be addressing the needs of underserved populations, among them African Americans in St. Louis. Although Trump falsely boasted that he had done more for Black people than virtually any president in history besides Abraham Lincoln, more than 90% of Black women voted against him, according to exit polls. The president didn’t do much better among Black men, despite winning more of their votes than four years ago.

“I think that we’re going to benefit in ways that we haven’t seen over the last four years,” Pruitt said.

In St. Louis, Black activists said that after four years of a president whose comments, tweets and behavior gave cover to racists, the nation has nowhere to go but up.

“The last few years have been intense to say the least,” said Kayla Reed, executive director of Action St. Louis, a grassroots organization that fights systemic racism. “We’ve watched what will be the previous administration weaponize public policy and positions throughout his party to really target already marginalized populations of people, incite racial rhetoric and behavior that has been both violent and hurtful, and really try to break a democracy that’s already kind of on its last leg, in my opinion.”

But Reed and others who aim to help Black people obtain more political power, said many will demand that a Biden administration strengthen democracy and help those fighting for equality. She said the record number of votes during the coronavirus pandemic speaks to how much people across the nation — especially Black, Latino, Native American and Asian voters in Georgia, Arizona, Michigan and Minnesota — want bold action to address public safety, climate change, improved access to voting and other important issues.

“What you see in those places are strong Black- and brown-led organizations, very similar to Action St. Louis, being at the forefront of the history making that’s taking place right now,” Reed said.

Biden’s status as president-elect won praise from Democrats across the nation, among them Democratic U.S. Sens. Dick Durbin and Tammy Duckworth of Illinois.

Durbin said Biden is an exceptional public servant who would tackle the coronavirus pandemic, restore the economy and help the country recover from four turbulent years that “revealed what was already broken.”

“He has taken the strength and wisdom he learned from his family, and his own experiences with loss and hardship, and he has used those lessons to give millions of Americans reasons to hope and ways to heal,” Durbin said of Biden. “And by his side is an outstanding vice president-elect in my colleague, Kamala Harris. Her historic election shows girls, women and people of color across this country that your future is limitless.”

Although some Republican leaders nationwide were gracious in their praise of Biden, Missouri Republican U.S. Sen. Josh Hawley was not. He echoed tweets by Trump, who has questioned media reports that Biden had surpassed him in electoral votes, alleged voter fraud but produced no evidence that it occurred, and called for states to halt the process.

“The media do not get to determine who the president is. The people do,” Hawley tweeted. “When all lawful votes have been counted, recounts finished, and allegations of fraud addressed, we will know who the winner is.”

One young St. Louis Republican voter said he is disheartened by the apparent result but respects the process.

“I'm finding it a little strange that it’s taking so long to count the thousands and thousands of ballots that are left when states are able to get through millions in a day,” said Matias Mayesh, president of College Republicans at Washington University. “I understand in some states the legislatures ruled that you had to count the mail-in ballots afterward, so I understand that there's some sort of delay. But it just seems odd that it's taking this long. Other than that, I'm fairly confident in the American election system still."

Mayesh, who voted in his first presidential election this year, said he believes it is more than likely that Biden has won the presidency. But he thinks the president does have the right to pursue investigations and recounts, even if there has long been little evidence of voter fraud in the United States.

He wants Americans to rally around the president sworn in on Inauguration Day.

"I hope the result is clear and Americans accept it and we can move on,” he said. “I do not want to see people lose faith in the system in a baseless way. It's still a good system in my view."

Many activists say that as much as they are celebrating Biden's projected victory, there is still plenty of work to do, especially when it comes to ending racism.

“I am happy to see Vice President-elect Kamala [Harris] go into office just because representation matters, but I am also very well aware of the fact that we have to continue fighting,” said Arkayla Tenney-Howard, a former social manager for the activist group RespectUs.

“It's not a time to relax,” she said. “We can celebrate today, but tomorrow we have to hit the streets together.”

Wayne Pratt and Emily Woodbury contributed to this report. 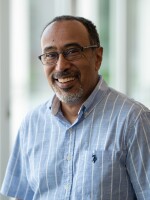 David Cazares
David Cazares supervises coverage of the arts, health and science for St. Louis Public Radio. Before coming to Missouri, he worked as an editor, arts reporter and podcast host for Minnesota Public Radio. He has also worked for newspapers in Florida, Kentucky and Indiana.
See stories by David Cazares

Chad Davis
Chad Davis is a 2016 graduate of Truman State University where he studied Public Communication and English. At Truman State, Chad served as the executive producer of the on-campus news station, TMN Television. In 2017, Chad joined the St. Louis Public Radio team as the fourth Race and Culture Diversity Fellow. Chad is a native of St. Louis and is a huge hip- hop, r&b, and pop music fan. He also enjoys graphic design, pop culture, film, and comedy.
See stories by Chad Davis

Andrea Y. Henderson
Andrea Henderson joined St. Louis Public Radio in March 2019, where she covers race, identity and culture as part of the public radio collaborative Sharing America. Andrea comes to St. Louis Public Radio from NPR, where she reported for the race and culture podcast Code Switch and produced pieces for All Things Considered. Andrea’s passion for storytelling began at a weekly newspaper in her hometown of Houston, Texas, where she covered a wide variety of stories including hurricanes, transportation and Barack Obama’s 2009 Presidential Inauguration. Her art appreciation allowed her to cover arts and culture for the Houston African-American business publication, Empower Magazine. She also covered the arts for Syracuse’s Post-Standard and The Post and Courier in Charleston, South Carolina.
See stories by Andrea Y. Henderson