'It's very rare for the health care system to ask the person their sexual orientation or gender identity… it's almost always the patient has to be the one that outs themselves.’

Dr. Jane McElroy is a professor of family and community medicine at the University of Missouri. She specializes in LGBTQIA+ healthcare and spoke about some of the common barriers and difficulties LGBTQIA+ patients encounter when accessing care.

Dr. Jane McElroy: I think the biggest thing that is unhelpful is the unknown for the community, and so, if you need to see a doctor, you don't know whether that person will accept you or not. And so, you're sick, you don't feel well, or you just need to do preventive care, and you don't know if they're going to absolutely reject you, and say, “I don't– I don't treat this kind of person.”

And so there's that unknown, you walk in, you don't know how you're gonna be treated, and sometimes it isn't the physician, it's the front-line staff, or it's the nurses, it's all the other people you interact with.

Because it's rare to go into a healthcare system, and you just see the one person. You often see multiple people and every single one of those people can have their own issues or own biases that come out in very unhelpful, mean ways.

So, I think that's one thing that really reduces the ability of people to be comfortable seeking health care when they need it.

So that’s, I think that’s probably one of the barriers. There’s, of course, there’s the barrier about people just not getting you. It's just, it just, it makes one weary when everybody talks about and uses the heterosexual, normative language. If I'm a female, clearly, I have a male partner; if I'm a male, I clearly have a female partner, you know, and just making those assumptions. And it just gets, it just gets tiring.

It's almost always the, the patient has to be the one that outs themselves. Well, again, that gets really old. How many times? I mean, the whole thing about, the question about “When did you come out?” is sort of, kind of a humorous question because people have to come out almost every day, right?

So, and then, “When was the first time you came out?” To who? To my best friend? To my family? To my work? They all vary, you know, and some you're not out to. So, it's just a, it's a very naive question to ask that.

Even if someone says I'm okay working with LGBTQ populations. “I'm fine.” There's a sense about, kind of this startled reaction, “Well, what am I supposed to do with this information?”

And then the, the classic “Well, I treat everybody the same.” It's like, “Well…” that actually isn't, you know, the point is that telling you that I'm gay, wasn't to be reassured that you're going to treat me okay, it was to let you know that I have may have different needs.

And clearly, you have no idea that there may be different needs that I have, that a straight person doesn't have. Because the response is, “Well, I treat everybody the same.” Well, we're not the same, we have different needs. 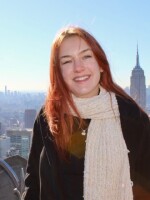