Kibby Smith: “Trees are so important because they do provide beauty, but they also provide shade and cooling.”

Kibby Smith spoke with the Missouri on Mic team at an annual tree giveaway for Arbor Day that was held at the Columbia Farmer’s Market in April.

The event was hosted by Columbia Parks & Recreation, the Columbia Center for Urban Agriculture and other nature-based organizations.

Kibby spoke about the importance of trees to a community – and about how the devastating 2011 EF5 tornado that hit Joplin, Missouri continues to impact the landscape of that community to this day.

Kibby Smith: I just love to come to the Columbia Farmers Market on Saturdays and it's kind of a tradition. And I am here every Saturday in the summers, but sometimes, you know, throughout – year round, round as I as I get a chance.

So, I just love to have a chance to check out the local vendors and just enjoy the beautiful weather today. My go-to shopping includes Pasta La Fata and Hemme Brothers Cheese, and I also love a lot of the different vendors who sell veggies and herbs.

There's many vendors that I support here, but yeah, Pasta La Fata and Hemme Brothers are probably my two faves.

And we're actually looking for a couple of new trees because we recently had to cut down a few dead ones, unfortunately.

I'm actually from Joplin originally, so that's about four hours southwest of here. That's where I was raised, and I went to high school in Joplin.

So, I've been in Columbia for about 18 years now. After my husband and I, after we graduated from college, we taught English abroad for about four years.

And then my husband decided to go back to grad school for his Master's and Ph.D. in English, and so that brought us back to Missouri.

"It's really just a way to provide some beauty and also some shade and cooling. So, you know, that's really important to us to have a beautiful surroundings."

So, I've been in Columbia now for 18 years, and we have a lot of different varieties of trees.

In the front, we have a red bud tree. We also have a lot of like fountain grass and a lot of flowers, but in terms of the trees, I think they're just your standard, your standard variety.

My husband's mother has a really good green thumb, and she's really a good gardener. So, she gives us a lot of tips, and so, that's where he gets his knowledge from, and I just kind of picked up a little from, from them.

And it's really just a way to, to provide some beauty and also some shade and cooling. So, you know, that's really important to us to have beautiful surroundings.

Our backyard overlooks a little pond and it's really nice. And so we just like that it's, you know, it provides shade and cooling for the house, and also it's just something beautiful to look at.

As I mentioned, I grew up in Joplin, Missouri. And you may recall that about – Gosh, what year was that? – 2011 was the big tornado in Joplin, and so, my family – my brother lost his house, and they lost their cars.

Fortunately, nobody that I personally knew was injured or lost their lives, but a lot of people were uprooted.

But the big thing I remember about that tornado is it absolutely devastated the landscape of Joplin, and there were so many trees, so many beautiful trees in Joplin, and the tornado wiped out so many of them.

And trees are so important because they do provide beauty, but they also provide shade and cooling, and, you know, they're important for life – to sustain life on Earth. 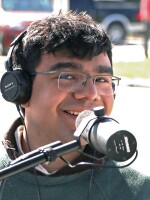 Tadeo Ruiz
Tadeo Ruiz is a Freshman in the Missouri School of Journalism from Mexico City. He's a reporter and producer for KBIA.
See stories by Tadeo Ruiz