Brittney Like: "If you want teachers, you need to pay them."

Brittney Like spoke with the Missouri On Mic team at the Poplar Bluff Municipal Library in July.

She works there, and she’s also a student teacher.

Brittney Like: I never had the best experiences with teachers growing up, they didn't really seem on my side.

But I have a lot of care in my heart for kids, especially kids that come from backgrounds where they need someone to be there for them.

I just want to be there for kids that don't have anybody.

Kailan Dixon: So you just said you recently had COVID. How was the pandemic affected your life?

Brittney Like: It's made, going for a teaching degree a lot harder, that's for sure.

Because at the start of the pandemic, I was supposed to be going into schools and getting practice.

And because of that, I feel like I'm a little behind.

Because I wasn't able to get in-class practice with actual students. They just wanted us to learn about how to talk to students, and learn about behavioral, behavioral health and how to manage their behavior.

But we haven't had a lot of practice in that.

So now, as I'm getting close to finishing that degree, it's made it really hard because I haven't had as much practice as I would like to.

Also, it's affected the kids, because they're not sure to how to interact when they get some kind of new person in the room.

Because they're so they've been so closed off from society, they just, they don't know how to function anymore.

And the only thing that's standing in my way right now is the fact that in 2022, we are still not paying people for student teaching.

And it's really sad.

Because during the pandemic, at its height, they were used to sitting at home in a chair at a computer, and maybe get being able to get up whenever they wanted, if they didn't have anybody watching them, they weren't forced to.

But now we've gone back to regular classroom seating.

So they're not used to having to sit still all day long.

We need to give them some kind of movement, given some enrichment, fidget toys are a big deal. I plan on keeping those in my classroom, or we have like yoga balls for seats.

They need to be able to move is what I've learned from this new generation of pandemic elementary schoolers.

And then it's all put on to me to figure out how to how to teach them as the new generation of teachers.
And the only thing that's standing in my way right now is the fact that in 2022, we are still not paying people for student teaching.

And that is a big factor.

Whatever, I know, there's been a couple of different news articles lately about 'oh, there's not any teachers in departments, we need teachers.'

And they're trying to do everything but pay people.

If you want teachers, you need to pay them.

And with student teaching, especially, because that's required of us to do and they don't give us any money, nothing for that.

Some people don't know that.

But it's like a nine to five job except you're doing it for free.

It's emotionally taxing. It's physically taxing. And I don't feel that it's fair that they're not getting paid for that kind of work. 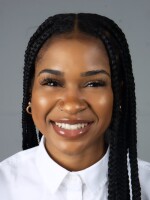