Though the shops along Sullivant Avenue in Columbus, Ohio had all closed their doors one cold November night, a young woman walked alone down the alley behind the Seventh Day Adventist Church. She was petite and wore lipstick, a tweed coat and blue jeans torn at the knee.

Side Effects agreed not to use her name — the woman feared violent retribution from her drug dealer. When asked what brought her out here, her response was direct:

She said she was 30 and struggled with addiction for three years. She even managed to get off drugs at one point, but that only lasted a year.

“I lost my job about a month ago,” she said. “Then one thing led to another.”

She relapsed and wound up here. Now her days consist of walking up and down Sullivant looking for “dates.” She earns anywhere between $150 and $300 a day, and most of that money goes toward purchasing drugs. She works “to feed my addiction, to eat, to sometimes find a place to sleep,” she said.

According to data from Columbus Police, prostitution is increasing in Columbus: In each of the past two years, the number of prostitution-related arrests has increased by 30 percent. Records from the Franklin County Municipal Court show the number of charges against individuals for “procuring” a prostitute have steadily increased, growing by nearly 50 percent since 2010.

Both local advocates and law enforcement believe the increase is being fueled by the opioid epidemic.

National numbers are hard to come by, but advocates and researchers fear the trend may be national. According to the Polaris Project, a national anti-human trafficking hotline, the organization received nearly 2,000 calls since 2015 from human trafficking victims who report opioid addiction. Of those, two-thirds say they became addicted prior to working in prostitution.

“I think there are those individuals that definitely either come in [to the sex trade] already addicted, or through the nature of becoming engaged in the sex trade become addicted,” said Meredith Dank, a research professor with expertise on human trafficking at the John Jay School of Criminal Justice at City University of New York.

Working In The Trenches

Nowhere in the city sees more of this activity than a stretch of several blocks along Sullivant Avenue—a busy street that cuts through the Hilltop, a neighborhood with some of the highest rates of poverty and crime in the city.

Sister Nadine Buchanan of the Dominican Sisters of Peace has been coming here several times a week for the last year, driving up and down Sullivant Ave., her car filled with sack lunches.

“I'm looking for ladies to give lunches to,” she explained. 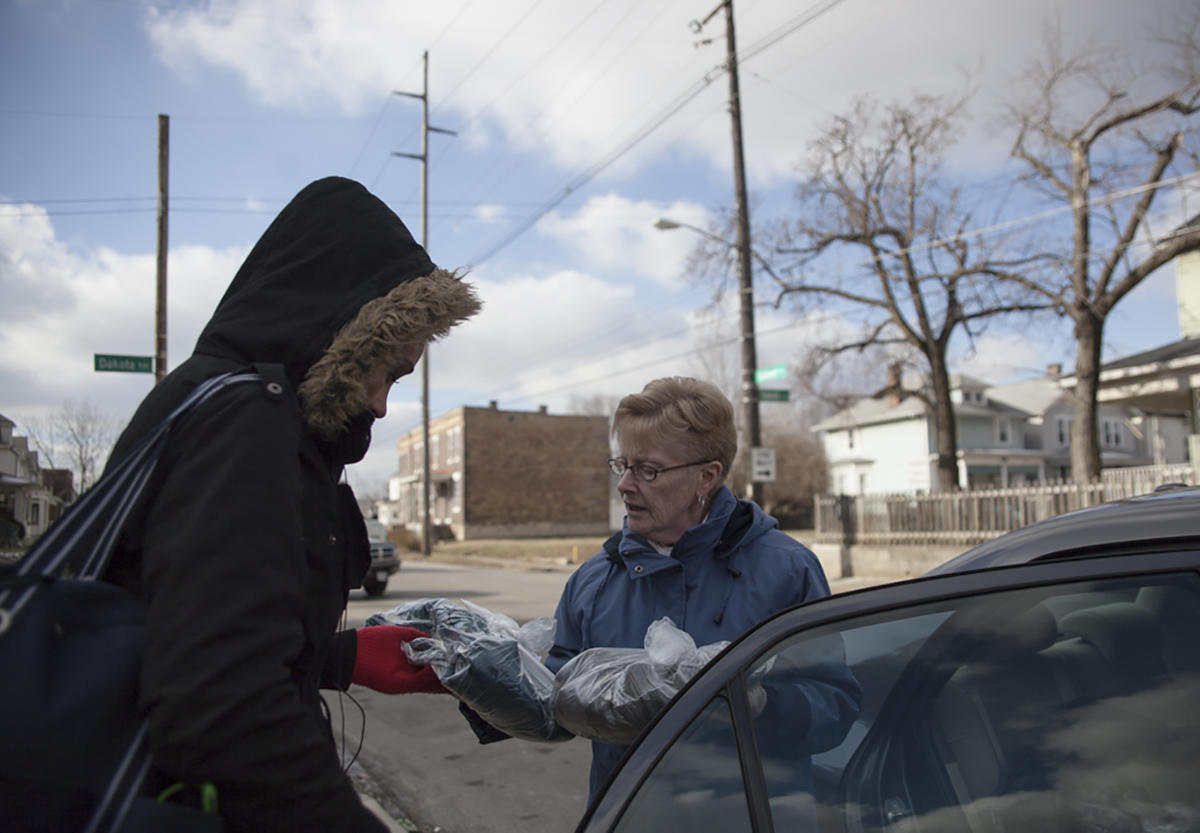 The lunches she hands out to the women typically contain a sandwich, fruit and something sweet, “to help with the dope sickness.” She also offers information for local shelters and addiction treatment centers.

At 67, Sister Buchanan has a small frame, glasses and a kind voice. While handing the women their lunches, she peppers them with questions about their safety and health. She calls everyone "honey.” Some women will even sit in the car with her for a heavy-hearted conversation.

Several years ago, she started volunteering at a number of organizations that serve survivors of human trafficking. She started coming here after she realized so many women were in need.

“They are so hungry and they really have such basic needs that aren’t being met,” she said.

In the last year, she's managed to help one woman (that she knows of) get off the streets. But the women she helps live transient lives —often they're victims of violence, incarceration and fatal overdoses — that she rarely sees the same person twice. 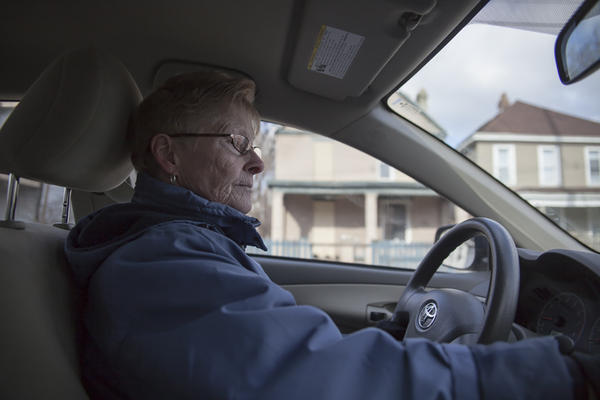 Sister Buchanan says she's learned to spot these women by their walk — the way they wander without any particular place to go. How they wait at bus stops, but never board any buses. Or how thin they are.

“It's nothing to find someone who is a size zero,” Sister Buchanan said.

The women Sister Buchanan serves lunches to, as well as several women interviewed for this story, all say they regularly go days without food or sleep. They live in houses that are either abandoned or run by drug dealers; they carry everything they own in their purses. At all hours of the day, regardless of the season, they’re out on the avenue, working.

“I had one girl in February last year, it was nine degrees, and she didn’t have any shoes,” said Sister Buchanan. “She was absolutely freezing.” 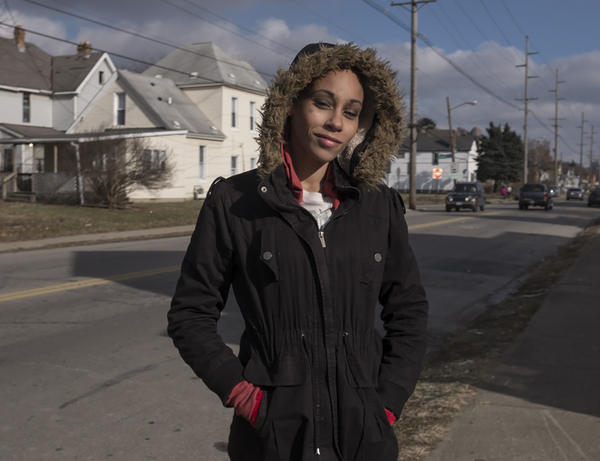 For Sister Buchanan, helping them is service she feels called to, but it is challenging.

“Sometimes when I come home and I just need to be quiet," she said. "And I say I have been to hell today, and it's the truth."

The link between heroin and sex work is not new, said Michelle Hannan, director of the anti-human trafficking effort at Salvation Army in Central Ohio. But it’s gotten worse in the last ten years. Today, she said, heroin impacts nearly 100 percent of the human trafficking cases the organization handles.

“It's become something that was a part of the equation to really the entire equation as it relates to sex trafficking,” Hannan said.

Though some women get started as a way to support their addiction, advocates and law enforcement say others are working under some degree of coercion by pimps and dealers who take all or most of their earnings in exchange for drugs and sometimes a place to sleep. Sex trafficking is defined by the FBI as “inducing a person by force, fraud, or coercion to participate in commercial sex acts."

Dank said opioid addiction redefines what many believe human trafficking looks like. There may not be outright force from pimps or dealers, but addiction leaves individuals vulnerable to exploitation. Dank recalled a case in Florida from a few years ago.

“A man targeted women in recovery,” she said. “As a way to continue to get them to work for him, he supplied them with drugs and got them re-addicted back onto the drugs.” 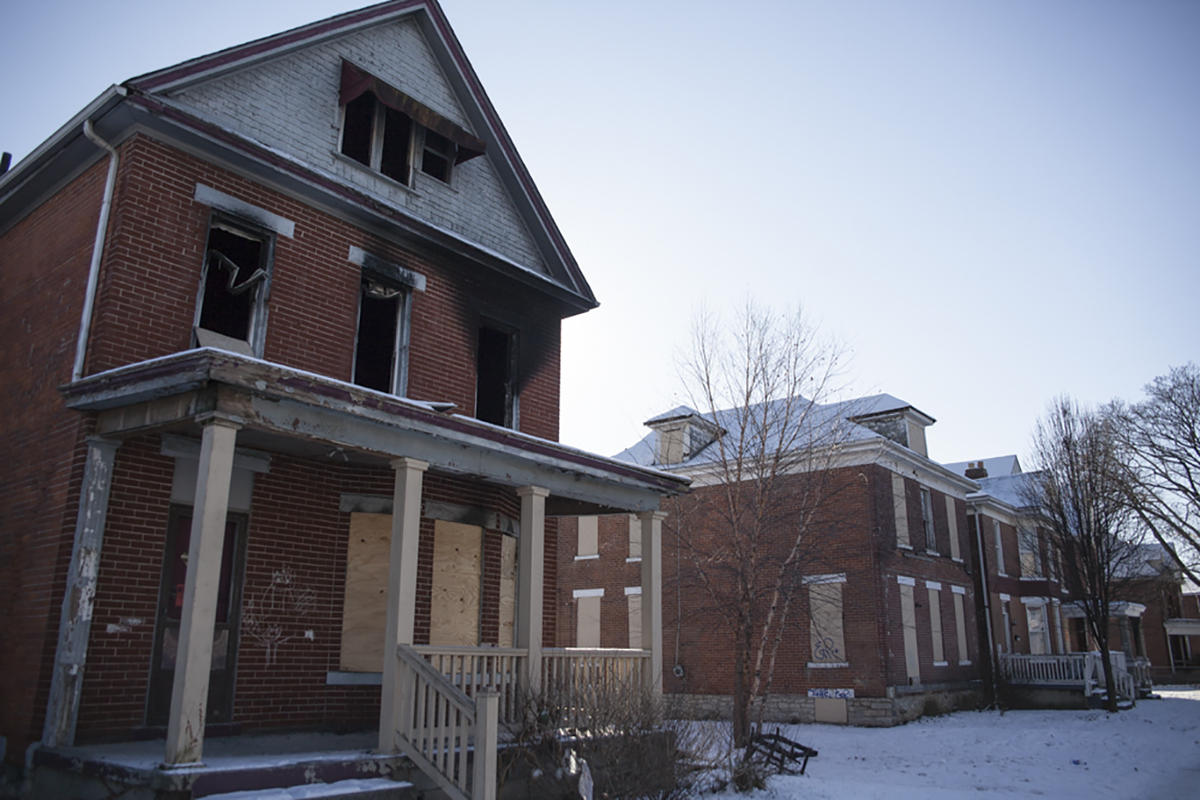 Dank fears opioid use is driving a growing number of people into sex work. However, there’s currently no research that explains how individuals addicted to opioids enter into to human trafficking, or even how widespread the problem is. For now, said Dank, the evidence is strictly anecdotal.

“It’s hard to maintain an addiction and also maintain a legal job,” said Dank. “It kind of spirals down into [someone] finding whatever opportunity to make cash to be able to purchase the drugs.”

"We Have A Disease"

On Sullivant Ave, many sex workers told me they felt stuck. They often work long days — as many as 18 hours a day on their feet, walking, looking for clients. One I spoke to told me she’s been beaten and raped by customers; she’s aware this work exposes her to HIV and other sexually-transmitted diseases.

But stopping is just as terrifying.

“I can't handle withdrawing,” she said. “I just wish people would understand we didn’t choose to wake up one day and be a heroin addict. We have a disease.”

For many women like her, this is the end of the road. Few people manage to find a way home.

This story was produced by a collaboration between Side Effects Public Media and WOSU News in Columbus, Ohio.

For People Recovering From Addiction, Insurance Rules Can Be A Big Obstacle

Twice a day, Angela and Nate Turner of Greenwood, Indiana, take tiny strips that look like colored scotch tape, and put them under their tongues.

At a small studio theater on the campus of the University of Indianapolis in June, it was standing room only for a performance of the original play, “Altered”,  an adaptation of Ovid’s Metamorphoses.

Lesli Butler played the role of Arachne, an expert weaver whose pride in her art had offended the goddess Athena.

“Without weaving I would not have found my identity, my life’s work,” recited Butler, “and to find one’s self in an art form is perfection.”

Tiffany Seda-Addington has been fighting for expanded access to naloxone for nearly three years. Ever since her best friend James Carmack died of a heroin overdose at his mother’s house.

“When James died,” Tiffany said. “It was immediately we have to do something.”

That “something” that she and others in Pulaski County, Missouri, decided to fight for was expanded access to naloxone, also known as Narcan. It’s the opioid overdose antidote that essentially brings a person dying from a heroin or opioid overdose back to life.