John Stanard: "The Daily American Republic’ is the successor after many, many names of the first newspaper in Butler County.”

John Stanard spoke with the Missouri on Mic team at the Margaret Harwell Art Museum in Poplar Bluff in July. He spoke about his family’s long history with the newspaper industry in the area.

John Stanard: I was born here almost 82 years ago. In 1940, I earned a journalism degree from the school of – Missouri School of Journalism. Went into the US Army for two years. I worked at the Minneapolis Star as a copy editor for a year and returned to Poplar Bluff then – joining my family on our family-owned daily newspaper here, “The Daily American Republic.”

“The Daily American Republic” is the successor after many, many names of the first newspaper in Butler County, Missouri that started in the fall of 1869. It was called the “Black River news.”

The first press was brought into this county at their request by oxcart. The man who did that was named John Bradley. He was the last Civil War veteran of this county, and in the Butler County Centennial of 1949, “The Daily American Republic” newspaper had a float in the Centennial parade, and Mr. Bradley was 106 years old and rode on the float along with me. I was nine years old, and I remember it well.

And Mr. Bradley himself was very colorful. He enlisted in the Union Army as a teenager, was captured by the Confederates, and according to his story, he killed his guard and escaped and made it back to Poplar Bluff.

No way for anyone to ever verify that, but nobody doubted him – he was a very upstanding citizen and later years and.

And so now, I have to tell you about my family. My grandfather was John Wolpers, and he was a Spanish-American War veteran. He came home from the Philippines. He got interested in newspapers, and in 1914, he bought the “Bonne Terre Citizen.”

And it was a little weekly paper, and he got extremely interested in in the newspaper industry then. And in 1916 then, two years later, the Republican paper in Poplar Bluff, which is about 90 miles south of Bonne Terre … was about to go under.

It's called “Poplar Bluff Republican,” and it was about to go defunct and the local party members didn't want that to happen. They knew about John Wolpers having a Republican leaning weekly up in Bonne Terre.

That started in 1916, and by 1923, they made it a daily paper five days a week. And five years later, in 1928, they bought out the competing daily, which was a Democrat paper called “The Interstate American.”

He combined the two papers, and he changed the name to “The Daily American Republic,” and declared it an independent newspaper. And the rest, as they say, is history.

By the late 50s, early 60s, the paper was successful and even more successful through the 70s and early 80s. It's supported four members of our family and their families.

And then we saw indications of the future of newspapering, and we sold the property in 1988 to another family group. We did not – by design – we did not sell to a chain.

"My grandfather was John Wolpers, and he was a Spanish-American War veteran. He came home from the Philippines. He got interested in newspapers, and in 1914, he bought the 'Bonne Terre Citizen.'"

At the time we sold the paper, we were publishing an average 22 pages a day, six days a week. It was a really nice publication.

I stayed on his editor, and two years later, the Woodward's decided to sell and I lost my job and about a fourth of the senior staff lost their jobs. And it was sold to Rusk Communications at Cape Girardeau, Missouri, and the Rusk company still owns the property today. 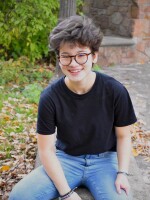 Ellie Lin
Ellie Lin is a junior Journalism student at the University of Missouri. She’s studying Cross-Platform Editing and Production with an emphasis in Multimedia, UX and UI Design.
See stories by Ellie Lin